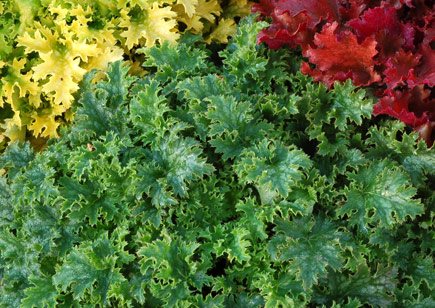 This green Heuchera is a very compact grower. Valerie Easton wrote about it in April. Valerie says "The emerald colored leaves are so sharply pointed and dissected you might wonder if this is a tiny holly. But the overall effect is much softer, more like a tightly ruffled fern glossed in delicate silver. Flowers aren't the point here, but 'Apple Crisp' blooms white on short spikes."

We have had some of the 'Peach Crisp' from the 'crisp' series and it seems to be a vigorous happy grower. We also have some Heuchera 'Pear Crisp' growing for the 2012 Northwest Flower & Garden Show.